What is whitework embroidery?

Whitework embroidery is an umbrella term for needlework done with white thread on white fabric.

Normal embroidery floss is often not strong enough so other threads are more commonly used.

Originally used for ecclesiastical items, fine whitework became popular with middle-class women in the late 1800s who used it to decorate christening gowns and bonnets along with nightgowns and household linens.

While the material used has changed over the years, embroidery is still popular. However, it does take skill and concentration as, in many forms, it involves either the removal or bunching together of the fabric threads. 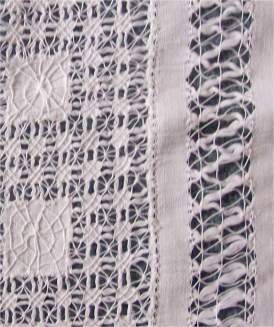 However, ground fabric is not always necessary. The stitches form the structure in techniques such as needlelace, also known by its Italian name "punto in aria." Translated into English, this means "stitches in the air."

Band 1 - Do the first filling stitch 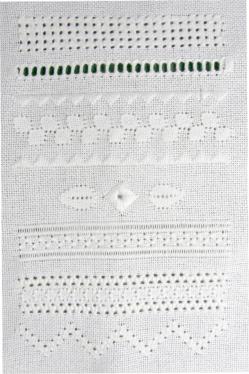 The links below will take you to the relevant sections on this page.

The term drawn thread work relates to a type of white on white embroidery where several evenly woven fabric threads are removed, and the remaining threads are grouped in clusters forming solid and open areas in a design.

Decorative hemstitching can be worked if the threads are removed in one direction only, for edges or insertions.

It is also possible to remove threads in both directions and bind the remaining threads together to form a grid that can then be further embellished with stitching such as needleweaving or darning. The resulting area is known as a withdrawn ground.

After the 17th century, it was often used on baby garments such as caps or bonnets and christening gowns or blankets.

See the link to Band 2 in the sampler above for a free tutorial on drawn thread.

Also known as drawn fabric or pulled work, this whitework embroidery does not rely on removing threads but rather moving them.

The stitches pull the threads into bunches allowing the holes formed to make the patterns.

Pulled thread work is not as effective when worked with coloured threads as the pulled thread stitches themselves are not meant to be seen. 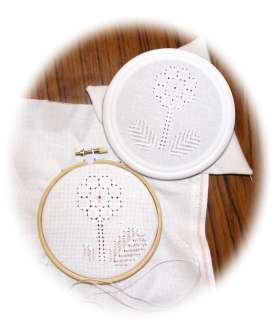 Hardanger embroidery is named after the area in Norway where it originated.

This form of needlework uses pulled and drawn thread techniques with the addition of satin stitch motifs. The areas where the fabric threads have been removed, are wrapped or needlewoven and lacy filling stitches are worked in the gaps.

My hardanger patterns can be found by clicking the link. 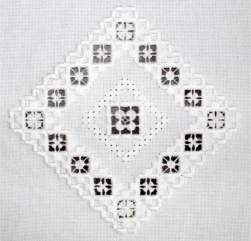 As I mentioned earlier, needlelace followed the early whitework embroidery techniques. Although lace is traditionally white, modern-day needlelace can be worked in many colors.

Using simple buttonhole stitches, it is possible to create gossamer fine needlelace or padded pieces that look like carved ivory.

It is often employed nowadays to create items for stumpwork projects and add decoration to crazy quilt blocks. 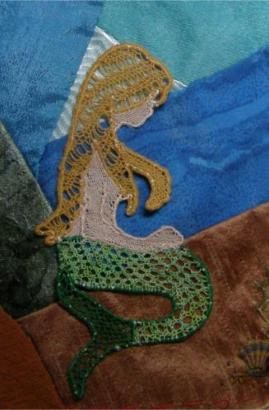 Cutwork embroidery was the forerunner to later needle-made laces. It seems to have first been mentioned in 12th Century chronicles when it was worked by nuns and kept secret from the general public. In those times it was used on priests' sacramental robes and grave cloths for saints.

During the 15th to 17th Century, upper-class ladies took up creating cutwork. In addition to making altar cloths as gifts for the church, they also used it to decorate their fine linens.

The original cutwork techniques expanded and became the basis of various other techniques. 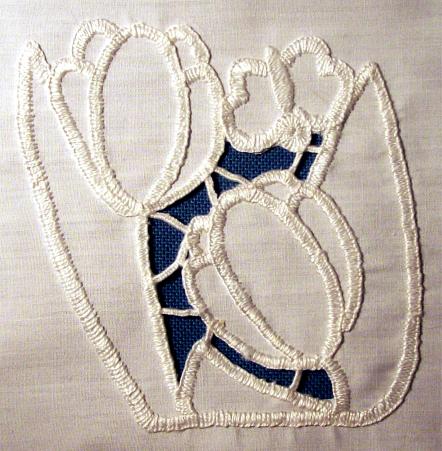 This whitework embroidery was often used for tablecloths or mantlepiece edgings, where a coloured fabric was attached behind the work to show up the open areas.

A sturdy form of embroidery, it stood up to washing well and pieces still survive today.

It was the first of the needlelaces with the fabric only used as a support while working. Threads were laid across a pattern, couched in place, and then overcast or buttonhole stitches were worked over them, decorated with picots.

It is considered the most beautiful type of needlework but takes time to construct. 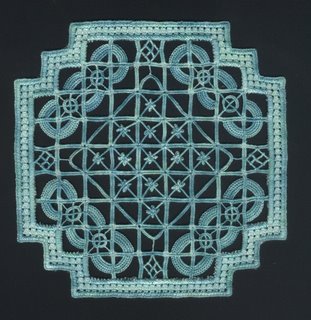 Reticella was again used for altar cloths, church vestments and also as starched trimmings to the ruffs that were in fashion between the 15th and 17th centuries.

The photograph above is a piece of modern Reticella stitched by Jenny Bargh from Sydney, Australia. Jenny adapted a pattern she found in an Italian magazine, "Rakam" to make this gorgeous example of the technique.

Jenny has her own blog at http://jennysaustralianneedleart.blogspot.com where you can see more of her work. She kindly agreed to let me showcase her work here for you. Thank you Jenny.

Another whitework embroidery technique popular in the middle ages, hollie point, or holy point, was also worked by nuns. It was originally used for church laces and often included sacred emblems such as Adam and Eve or lilies.

Worked in Hollie stitch, a buttonhole stitch with an extra twist, the pattern was formed by the spaces between stitches somewhat reminiscent of filet crochet.