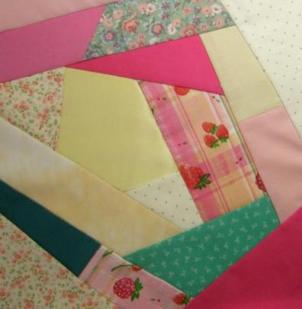 Why not take a seat beside me and watch the process of foundation piecing and see how I created my "Strawberries and cream" block. Crazy quilt patterns take shape as you work, so you are free to choose your own arrangement, mine is just a suggestion. You may also know this technique as crazy patchwork. If you would like to read about the history of victorian crazy quilts click here.

Please bear with me if this page takes a while to load, as there are lots of pictures showing you the process step-by-step!

I was lucky enough to find a bag of fabric offcuts in a craft shop. Inside I found a lovely fabric printed with scattered strawberries, raspberries and cherries which begged to be used for crazy quilting. In the bag there was also a bright pink that shouted "Use me too!" and a cream with tiny gold dots that resembled strawberry pips. Perfect.

I searched through my existing scrap bag to find additional fabric pieces that would tone or contrast. I found some solid creams, two other pinks, and some cream/pink prints along with some greens to represent the strawberry leaves. I washed and pressed the fabrics and was ready to begin.

I chose to stitch by hand but if preferred you could use a sewing machine. 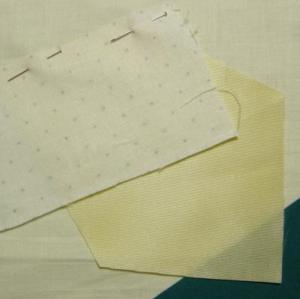 The first step was to take my backing fabric (muslin or calico) and cut the foundation square.

I used a tiny scrap of yellow taffeta from my daughter's bridesmaid dress to make my first patch. Being translucent if I used it later in the process, seams would show through the delicate fabric.

I laid the taffeta on my self healing cutting mat and cut a five-sided shape then positioned it on the background square, slightly off centre.

The second piece of fabric

I cut a rectangle of the gold-spotted cream, allowing a quarter inch seam allowance, and laid it on top of one of the edges of the first patch, right sides down. After pinning in place I stitched a back stitch seam along that side of patch one. 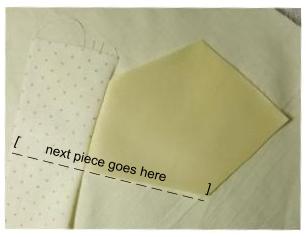 The next step is to press the seam open with a medium hot iron. I like to keep a folded terry towel on my worktop so that I can press as I go along.

I trimmed off the long end of the cream fabric, then I turned the foundation square one quarter turn to the right.

The next piece of fabric 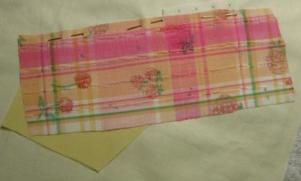 I chose the strawberry fabric as the next to include in my block. The pattern had the benefit of giving me a nice straight line to stitch my seam along.

I positioned this rectangle along the next edge of that yellow patch, and the seam continued right to the edge of the cream spotted fabric as well. 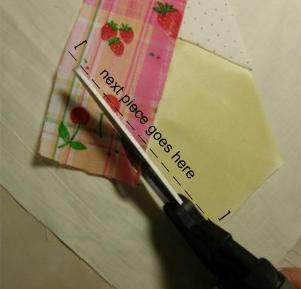 After pressing the seam, I trimmed off the edge of the rectangle that jutted out beyond the end of the yellow patch.

In the next photo you can see that I used tailor's chalk to mark the seam allowance on the bright pink cotton. You could also use a disappearing ink pen to mark the line, but mine is pink, so wouldn't show up!

I laid this patch along the next side of the original yellow patch and the stitching extended along the trimmed strawberry fabric as well.

Don't worry about that little section of strawberry fabric sticking out, I will trim that off afterwards. 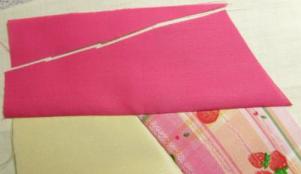 After pressing the seam, I trimmed the pink rectangle at an angle in order to add some variety to the shapes in my finished project. I left the trimmed section beside the patch so that you could see what I removed. 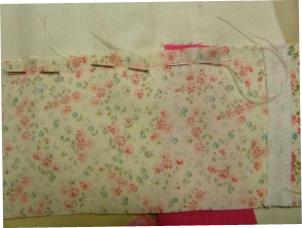 I made this next patch from a nightdress my daughter used to wear when she was a toddler. I will trim off the hemmed edge in a moment.

I laid this rectangle along the fourth edge of the yellow patch and on top of the pink patch we just trimmed to shape. 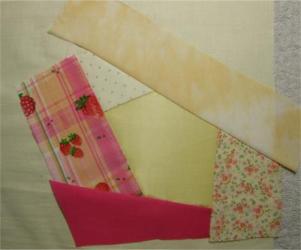 With this patch we are now moving on to longer strips. This one fits along the edges of the yellow patch, (the second one that we attached) and also along the one we just added above.

I picked a piece of fabric from an old blouse that I tie-dyed back in the 1970's for this patch and positioned it so that the creamy coloured area met the printed fabric of the last patch, and the yellowy/orange section met the cream spotted fabric.

This patch completes our first "journey" around the crazy quilt block.

We are still turning the block a quarter turn after attaching each strip.

In the photo you can see that the "nightie" fabric actually takes us to the edge of the foundation square on that side of our yellow shape. This won't always happen and you would normally continue adding patches all around in a second journey. For this block, we will only need to add shapes to the existing patches on four sides. 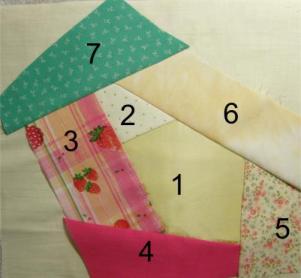 In this photo I have numbered the patches in the order that I attached them. As you can see, I stitched the green patch (from my daughter's old skirt) to patches 2, 3 and 6.

After stitching and pressing, I have trimmed this patch to a slightly more angled shape. 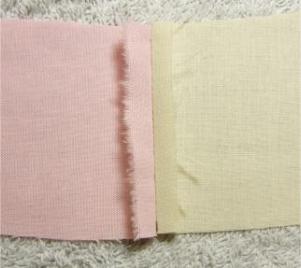 The next patch will lie alongside patches 3, 4 and 7 and therefore will be rather long. To avoid our crazy quilt block ending up looking strippy I seamed two fabrics together separately for this strip. 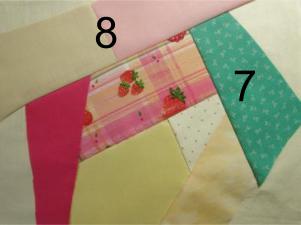 On attaching this pieced strip to the block, I was careful not to position the seam so it matched up with any other already on the block. 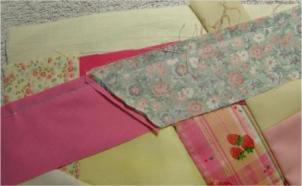 Again, for this strip I pre-seamed two fabrics together, this time on the diagonal.

Rather than trimming the existing patches to shape beforehand, I laid the new strip in place, along patches 4, 5 and 8, stitched it and then trimmed off the excess from previous patches. I wanted to create a triangle from the existing dark pink patch. 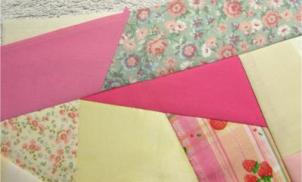 As you can see in the photo, I positioned the printed fabric in this strip next to the solids in the existing crazy quilt block and vice versa. 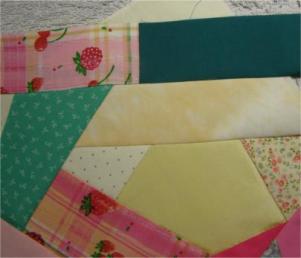 For the last pieced strip I seamed the darkest green and more strawberry fabric together and stitched them to patches 6 and 7.

All that's left now are the corners.

On adding corner pieces I tried to ensure that they were all differently shaped and sized triangles. I balanced the existing dark pink patch with a second piece of that fabric in the bottom right corner. Similarly, I used the light pink, cream spotted and "nightie" fabrics again for the remaining corners.

The last job was to trim the overhanging patch edges even with the foundation square and the block is ready for the decorative stitches.

I created this quilt block using the stitch and flip technique of crazy patchwork.

I hope the step-by-step photos and instructions have helped you to see that it is simple to piece your blocks and lots of fun. Now it's your turn.

Come back when your block is ready and we will start the embroidery phase.