An introduction to pulled thread embroidery

So you've been embroidering for a while now and are ready to learn something new?

Instead, tension is used when working the stitches to draw the fabric threads together to produce a lacy effect.

The tools you will need to create pulled thread work comprise of...

You need to use a loose, evenly woven fabric to create your pulled thread work so that the fabric threads are easily moved to reduce the risk of breaking them due to the tension required.

Historical pieces were sometimes worked on 50 count linen or cotton, but it is more common to use 28-36 count nowadays which is certainly easier on the eyes.

Threads used need to be good quality and strong enough to withstand the strong tension, such as crochet thread, lacemaking threads or pearl cotton. Normal embroidery floss does not lend itself to pulled thread work.

If you don't have any suitable thread, you can always use the fabric itself! Just unravel threads from the edge of a spare piece of fabric and stitch with them.

Of course, the thickness of the thread and the colour will then match exactly! This is important as the design will be formed from the gaps which are created when the fabric threads are pulled apart, not the stitches themselves.

Getting ready to start 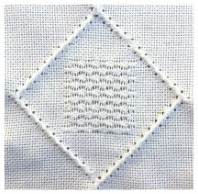 Place your fabric in your embroidery hoop ensuring the threads are lined up at right angles and are clearly visible for counting. DO NOT stretch the fabric too tightly in the hoop as you will need some give in order to position your needle easily.

Starting and finishing your threads needs to be done with care, as stray threads can show behind the openwork embroidery.

One way to avoid this is by using the hoop to trap the beginning of the thread under the top part of the hoop, so it can't accidentally be pulled out of the fabric when starting the stitching.

To fasten off, release this thread later and carefully pass it through the solid areas where the threads have been pulled together on the back of the work.

Composite stitches are built using two or more, worked in conjunction to create a different effect.

One thing to keep in mind, is that the way the stitches are shown on a chart may not match how they look once they are worked. Honeycomb is a good example of this, as it resembles brick work when charted out rather than triangular.

Surface embroidery stitches (not pulled) can also be used in this type of needlework.

I have put together two free pulled thread embroidery projects to get you started.

First there is a simple design using just two stitches which can be mounted in an aperture card or made into a coaster. You will find the pulled thread instructions here.

Then, when you are a little more confident, you can stitch a band sampler while trying out the pulled thread stitches listed above.

This sampler is broken up into seven lessons and was originally released as a stitch-a-long in my newsletter. One band of the sampler is worked in drawn thread embroidery, which will help to show you the difference in effect and technique.