The Fleur-de-lis is a device consisting of three flowers, usually arranged in a triangle. In French, the word "fleur-de-lis" means "lily" or "lily flower" and the crescent shape represents the waxing and waning of the moon. However, it is sometimes considered not a lily, but a wild iris, hence my choice of purple and gold in the blackwork designs below.

There are several different meanings for the symbol. It has religious connotations for Roman Catholics with it being used to represent the Virgin Mary, with the three petals referring to the Holy Trinity and the encircling band signifying her purity.

It is also found on many European flags, heraldic emblems and coats of arms. The latter began to be used in embroidered form shortly after the Crusades began in the mid-11th century. It was a way for nobles and wealthy people to recognize one another in combat.

The symbol was chosen as a military decoration by the Knights Templar. It has also been adopted as the symbol of the city of New Orleans, Louisiana and many cities in the United Kingdom and Ireland.

You may have also seen pointed fleur-de-lis decorations on top of walls or fence posts to deter intruders from entering. Wall tiles often feature the motif, as do friezes. I decided to depict the symbol creatively in different forms, using the patterns and textures of blackwork to their advantage. 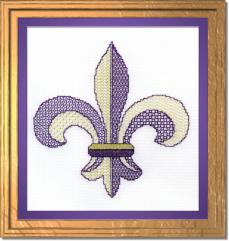 Closest to the original design, Valour is similar in design to the emblem of the Scouts. The leader of the movement, Lord Baden-Powell, chose the three petalled shape as he said it symbolized the three aspects of the Scouts Promise - reliability, leading the way, and serving others.

The strong looking fills, reminiscent of chain mail, in this blackwork pattern, represent bravery and courageousness. 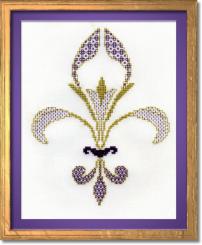 An altogether more delicate depiction of the iris flower, this beautiful design represents Wisdom. Perhaps it could be the flower that the Virgin Mary held as in old stained glass windows? 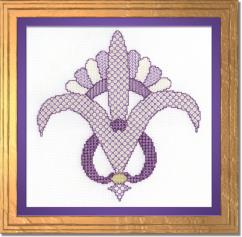 The third design in the range is an ornamental interpretation of the basic shape known as the "au pied pose" which has a triangular pedestal, or foot, below the gold band.

If your room has fleur-de-lis wallpaper, then one of these blackwork designs framed and hung, can really complement it.