Have you tried Bargello needlepoint?

If not, can I encourage you to give Bargello a try? It is one of the easiest forms of needlepoint as it consists of just one simple straight stitch. This is repeated in different colors and different positions on the canvas, to create striking patterns. 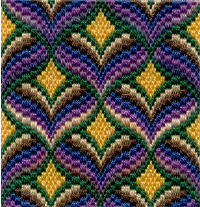 If the word Bargello is unfamiliar, you may have seen this form of work referred to as florentine stitch, hungarian point or flame stitch embroidery.

It is not a new needlework technique. In fact it has been used since the 15th century for bed and wall hangings, upholstered furniture and table coverings.

But you don't need to undertake such huge projects as those! It works just as well on pillows, bags, belts, purses or even framed pictures.

I was first introduced to it as a teenager in the 1970s, when it was often worked in wild and wacky color combinations! I will go into color in more depth shortly, but first let's look at what you will need to get started in Bargello needlepoint and how it is worked.

What do you need?

There are some essentials you will need, and some "nice to haves" if you are thinking of trying Bargello...

In Bargello, distinctive patterns are built up from rows of straight stitches, arranged in a zigzag line, and repeated in varying shades or colors. 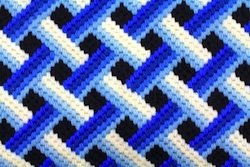 The steepness of the zigzag depends on how many threads the stitch is worked over, and the position of subsequent stitches. The diagram below shows that when the stitches are stepped by more canvas threads the peak is higher.

To give a more rounded effect groups of stitches can be worked either at the end or part way down a slope, as in the photo at the bottom of this page. Traditionally all the stitches in a design are the same length throughout.

They can also be arranged to form a lattice work, as in the photo, above. 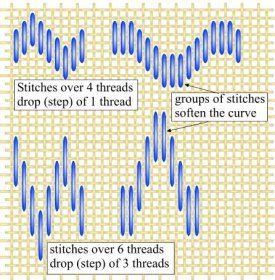 There are three main types of design in this type of needlepoint: row, motif or mitered.

The simplest is a row design. The pattern is established in the first row, and then repeated using a different color, tone or tint in subsequent rows. I will explain the color terms shortly.

To create a motif design, part of a row is mirrored and a medallion or motif is formed. The medallion can be filled in repeating rows or each enclosed area can be dealt with differently. The pattern is mainly formed by the use of color.

A mitered or four-way bargello needlework design consists of a triangular section that is then mirrored both ways. Both rows and motifs can be worked in this manner. Some traditional patterns worked in this way are known as tulip, rose and pineapple.

How to use color

In Bargello the pattern relies heavily on hue changes. These can be subtle or vibrant.

One color scheme you can use is monochromatic. This uses tones of one color. Take pink for example, you could start the sequence with a burgundy (a shade is made by mixing black with the original colour) and then use lighter and lighter tints (mixed with white) ending up with a very pale pink, similar to that in the photo below. This sequence is then repeated. 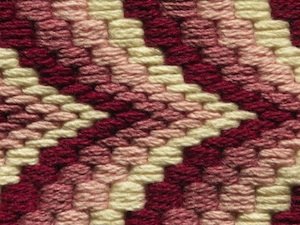 I don't want to get too technical here, but I'll introduce another color term; analogous. Basically this scheme uses related hues that are close to each other on the color wheel. For example red, orange and yellow. Another choice would be purple, blue and green.

Bargello needlepoint can also be worked with contrasting or complementary colors. To find any color's contrast look opposite it on the color wheel. Yellow is opposite purple and therefore its contrast. The same goes for orange and blue. The trick here is to use much less of the contrast than the main color. Think of it as an accent. If you use equal amounts of each the effect won't be as vibrant. Think of a mainly blue room that has the occasional orange pillow to give it some "spark"! 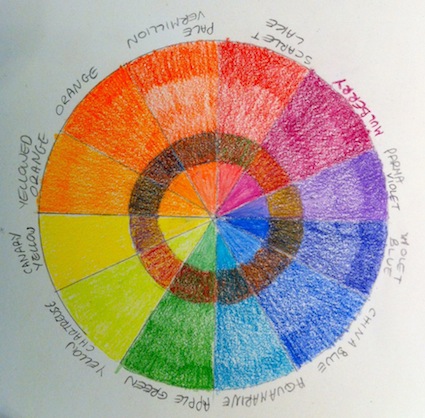 I created the color wheel above using Prismacolor colored pencils. Around the edge I pressed harder to give the most vibrant color, and the lighter color inside that represents the color with white added, or a paler tint of the original hue.

The darker inner wheel shows where I used the complementary color to "grey" the pure color, by mixing the two together (or in this case layering one over the other).

Have a go yourself

If you fancy trying this technique you might like my little bargello bell freebie design. It would make an ideal Christmas card!

Keep in Touch with Sitchin'Times Newsletter

Have your say about what you just read! Leave me a comment in the box below.