Gobelin stitch and its varations

In the photograph below, the center sample is gobelin worked over 3 canvas threads, in an upright manner. The needle goes down through the last hole of the previous row. Some example ideas for its use could include borders, weather-boarding or roof tiles on a building or a ploughed field in a landscape.

The right-hand sample in the photo above shows slanted gobelin stitch. Again, I worked the stitches over 3 canvas threads, but the needle goes down one stitch to the right, giving the stitch a slant.

You would want to use a thicker yarn than the one I used to stitch this sample. I just wanted to make it clearer for you to see the individual stitches.

Worked similarly to the slanted variation, the stitches in the left-hand sample in the same photo encroach, or overlap, on the previous row by one canvas thread. The result is a smoother overall effect. Changing from one color to another gives a softer shaded effect than the abrupt change obvious in the basic gobelin variation.

This can make lovely hair or animal fur in a needlepoint design, besides being a wonderful background filling stitch.

A variation is to leave a gap between each stitch. On the following row you then work up into the first, placing your stitches in between the existing ones.

You can work the stitches over any even number of canvas threads. In the photographs below, I worked over 6 threads. 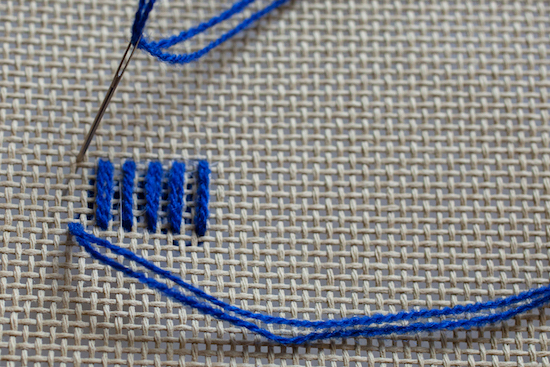 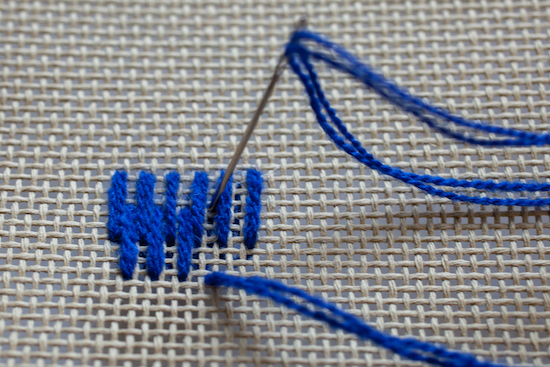 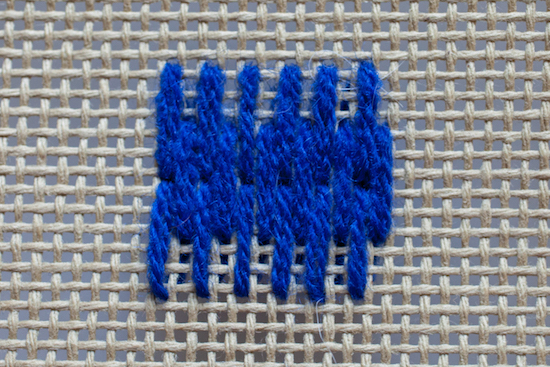 Alternating one long stitch (over 4 canvas threads) with one shorter over just two, gives you Parisian stitch. For the subsequent rows, you make the long stitch under the short one in the previous row.

I worked the photo above with mixed strands of crewel wool in the needle to give a more natural effect to the grass in this design. 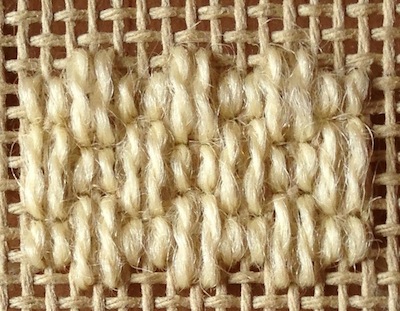 If you work two long, and then two short stitches, you create double Parisian stitch. This almost gives a woven appearance to the needlepoint work. It would work well for a basket if turned by 90 degrees, or even a fence or hurdle.

I have worked this sample in two colors to make it easier to see the diamond shapes that this variation creates. It also works well in a single color.

I worked the stitches, over 2 and 4 canvas threads, in the following order...

Short, long, short, then miss a hole and repeat. I work subsequent rows with the long stitch going down in the "missing" hole of the row before.

I love using this to represent clothing in a design and have also used it for skies, to give a little texture.

The straight gobelin is also used in Bargello needlepoint, similarly to the double Parisian above. You can find more information along with a free pattern for Bargello by clicking the links.