Ready for a virtual needlework tour of Arlington Court?

This stately home has been owned by the Chichester family since the 14th Century. You may have heard of Sir Francis Chichester, the yachtsman famous for being the first person to sail single-handed around the world in 1960. Miss Rosalie Chichester bequeathed the house and grounds to the National Trust in 1949.

As National Trust members we paid a visit to Arlington Court when we were on vacation in Barnstable, Devon.

I was keen to look at any needlework and textiles on display.

The staff allowed me to take photos as long as I did not use flash. As my camera doesn't have a flash that wasn't an issue.

The first piece of needlework I spotted downstairs was this exquisite pole screen depicting a white Arab horse. The stitches were TINY. I guess that the canvas count was as high as 50 threads to the inch! The stitcher used tent stitch or petit point for this screen. 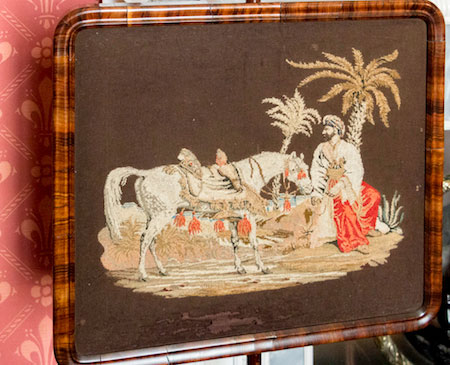 Next was a floral chair seat cover, also worked in needlepoint. Although still small, the canvas count was not so fine as the picture above. It impressed me that the colours were still so bright in this piece. 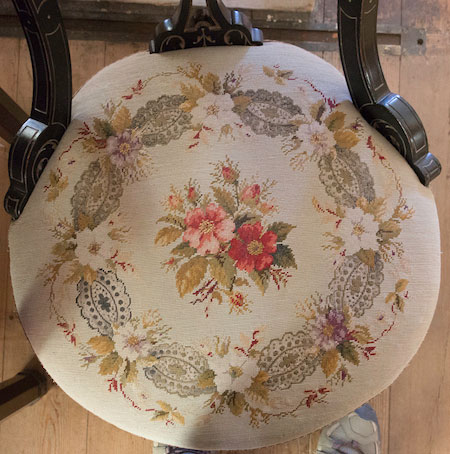 The First Floor of Arlington Court 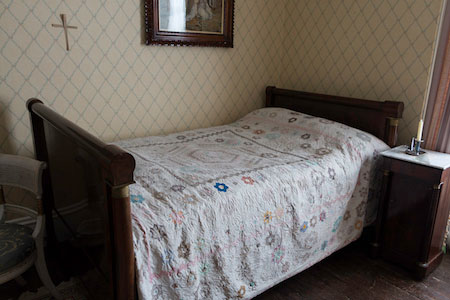 The tiny fabric hexagons that make up this stunning patchwork quilt can't be more than 2cm across! I can't imagine how many hexagons there were in total in this quilt.

Dating from around 1890 it is now in a very fragile state. 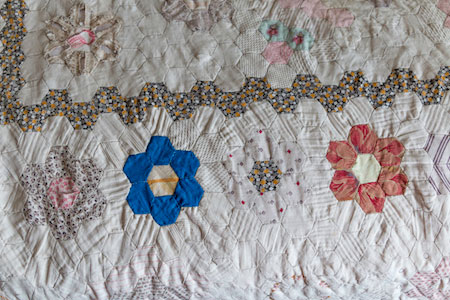 Sticking to a geometric theme, I discovered another pole screen. These helped protect people from the heat of an open fire and were adjustable. I had a feeling that the colors would have been more vivid when it was first stitched. 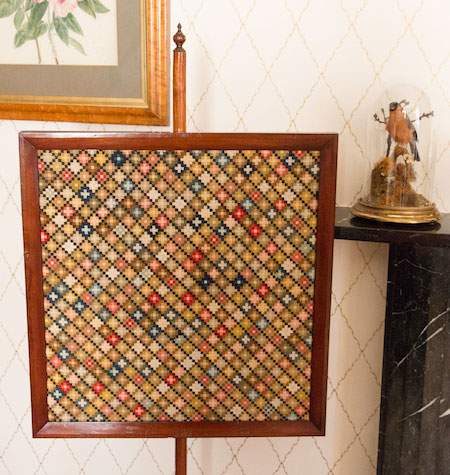 One piece I admired was a crewelwork bedcover in the Library Bedroom (so named due to two large bookcases by the door).

Worked in shades of blue wool, it featured fantastic birds, exotic plants and flowers. The colors had likely faded, giving it a rather muted, but still beautiful appearance. 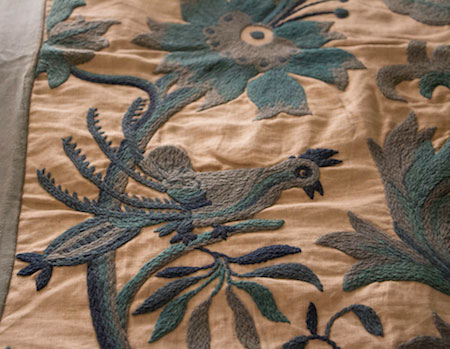 Upon close inspection I could see chain stitch, long and short stitch, and stem stitch used here along with French knots and many other stitches. 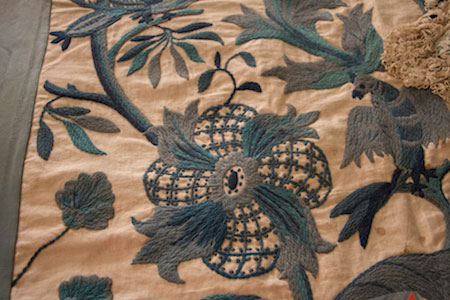 Would you believe they found this bedcover rolled up in a drawer where it had lain hidden for years? There was a note, stating that the maternal grandmother of Sir Francis Chichester made it.

In the same room as the quilt was a couch with a pile of cushions (or pillows for my American friends).

The smaller of the two in the photograph below used the Berlin Woolwork technique popular in Victorian times.

The other comprises embroidery on silk. 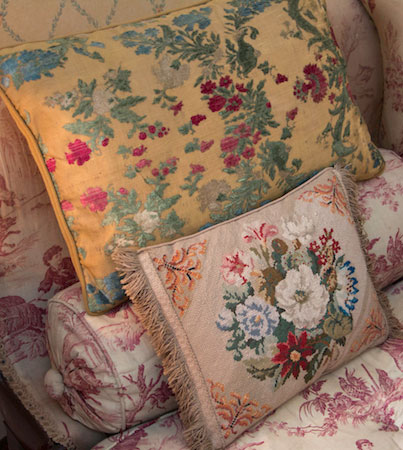 A glorious chair, covered entirely in needlepoint flowers, sat at the foot of the couch. The soft hues had faded a little, but were still lovely. 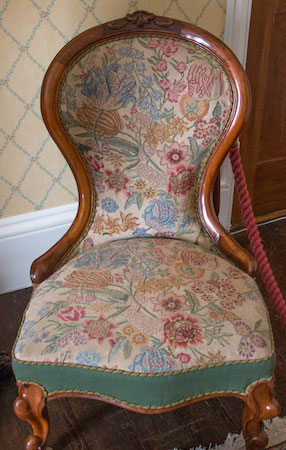 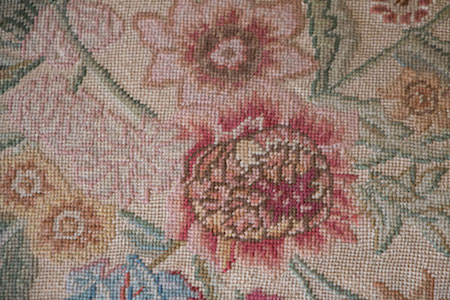 On the floor, in front of the chair, was a sweet needlepoint foot stool.

On display in a glass fronted display case, there were two pieces of stunning goldwork embroidery. This motif on a black fabric was only a fraction of the whole item. 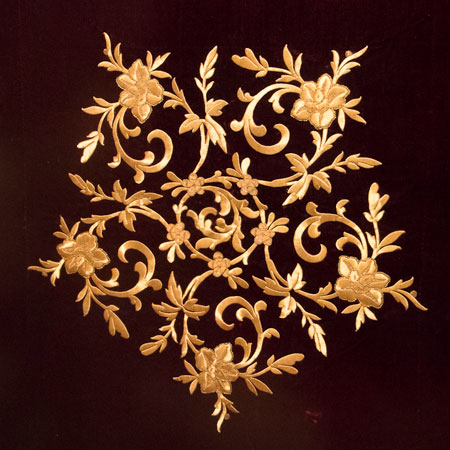 The goldwork border, below, was hanging at the back of the case and this was the best photograph I could manage without getting reflections in the shot. 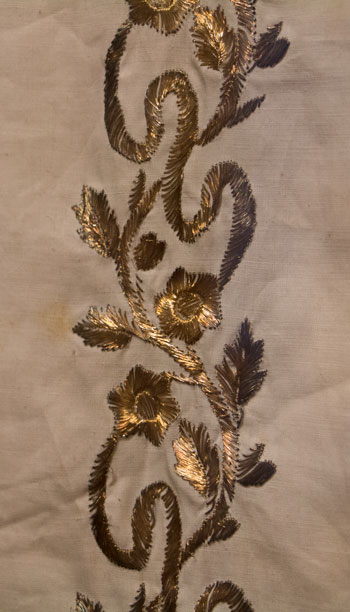 Last, but not least, was a modest needlework basket, full of bits and bobs. 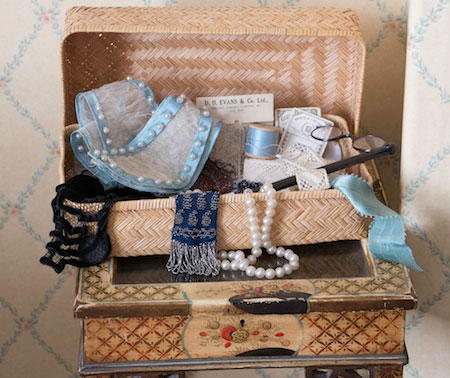 Other highlights from Arlington Court

I have only mentioned the needlework related items above, but there was lots more to view in Arlington Court.

Grand collections of ornamental elephants (including one made from red amber), shells from around the world and model ships and yachts were in abundance (perhaps not surprising due to the Sir Francis Chichester connection).

In the grounds is the National Trust Carriage Museum, which at the time of our visit hosted the golden coach from Princess Diana's wedding, a genuine joy to behold! We were also delighted to watch a demonstration of a heavy horse moving tree trunks.

The gardens were stunning too. What a beautiful spot to end our visit. The scent of the wisteria was such a treat, I could have sat here with my mum and husband for hours. A nearby gardener kindly offered to take our photo as we rested our tired feet. I love how he framed us under the archway.

Definitely a day to remember, and well worth a visit if you are ever in this area of Devon. 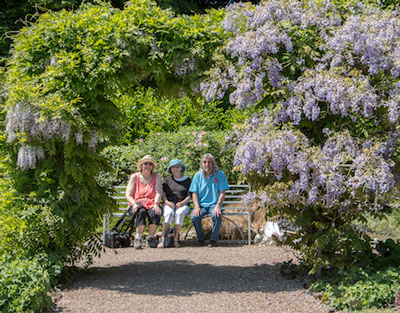