The National Trust owned estate at Wallington Northumberland was one of our must-see destinations on our recent vacation to the North of England. Of course the house and its needlework was the major attraction for me but the grounds had something exciting to offer as well.

This area of the country is one of the few places where you can still see wild red squirrels, and we saw 3 of the lovely little creatures during our visit. A first for me and an experience I enjoyed immensely. 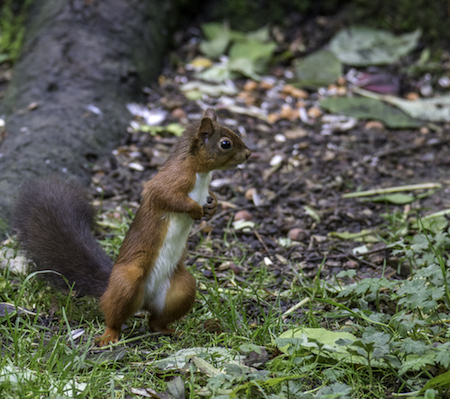 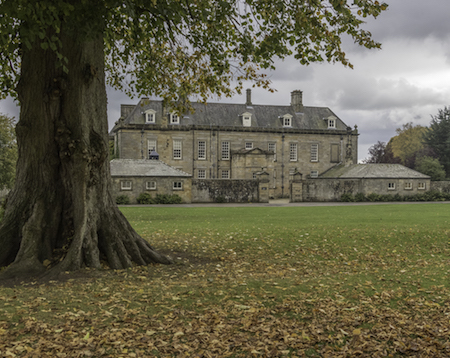 In the house, there were three rooms in particular that I wanted to study - The Nursery, The Dolls House Room and The Needlework Room. More on those later.

There were other interesting pieces scattered throughout the rest of the building, which also caught my eye.

I could take photographs as long as I didn't use flash.

Wallington Northumberland was owned by the Trevelyans, from Cornwall, before being gifted to the National Trust in 1941. The first piece I spotted, in the Drawing Room, featured the story behind the family's coat of arms. 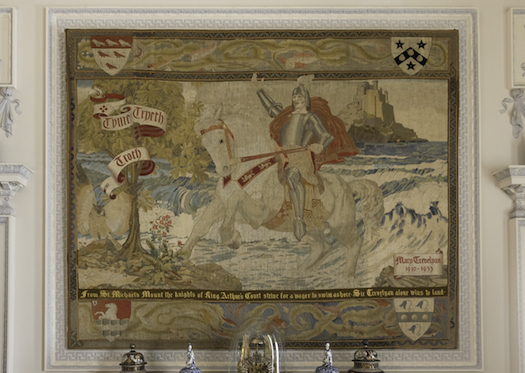 The knight on horseback depicted in the large needlepoint panel was the first Treveleyan, riding ashore at St Michael's Mount in Cornwall. Molly Trevelyan stitched it and took her 23 years to complete! A painting on another wall in this room shows Molly actually working on this piece. 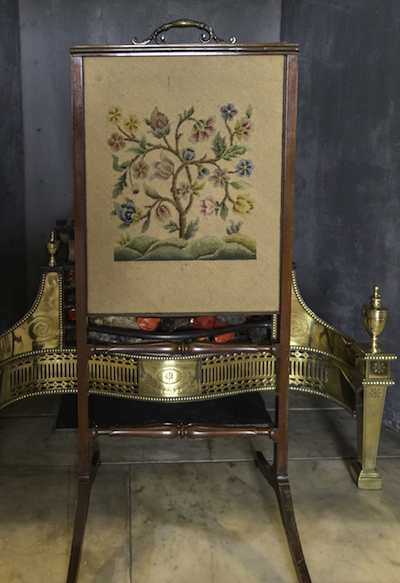 There were several fire screens on display in the rooms downstairs. Although the fire screen in the photo above looks like crewel embroidery however, the stitcher used tent stitch throughout. 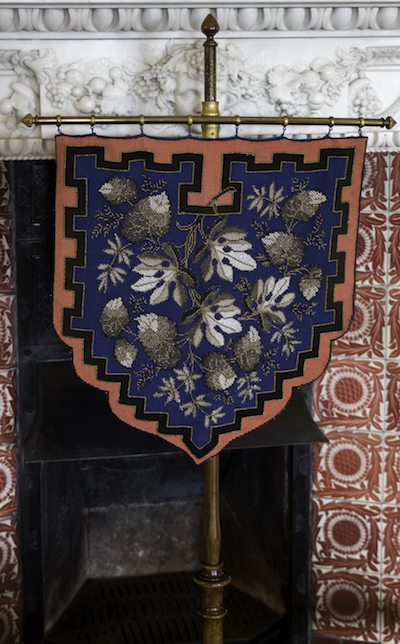 This unusual shield shaped banner again used tent stitch, some worked in metal threads. It stood in the Library and behind it was a Victorian cast iron grate and De Morgan tiles. 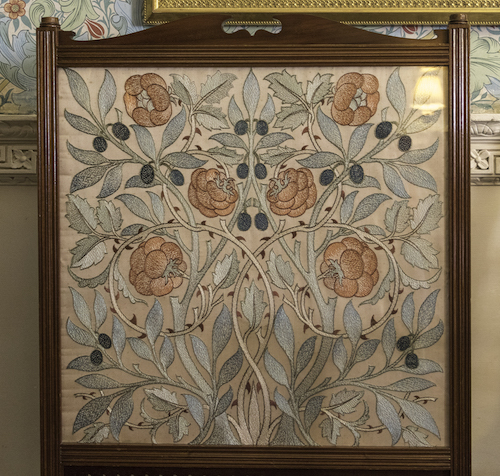 The third fire screen was my favourite! It appeared to be worked in either brick stitch, long and short stitch or couching. Maybe even a combination of all three. I do apologize for the reflection of the lamp in the top corner of the photograph.

The old Servants' Hall contained a collection of dolls' houses, which just happens to be another of my hobbies.

On entering the room I saw a veritable street of antique houses lining the side wall. But the main building was given pride of place in the center! 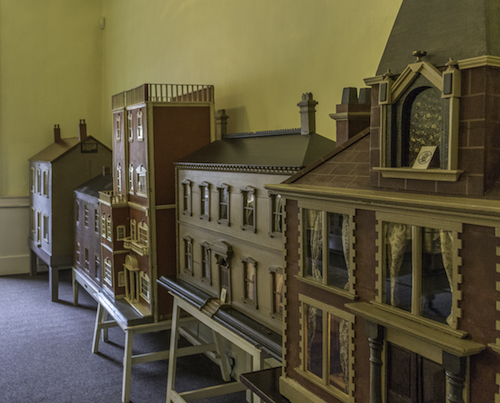 Hammond House, contained 36 rooms each lit by electric lights. It was inhabited by 77 1/12th scale dolls, including the master and mistress, their family and a full range of servants. Providing a record of life in the 1880s, it still contained the original wallpaper, floor coverings, furniture, china, glass, linen and even cutlery.

A towel and a book showing the name Ruby Hammond, gave the house its name. 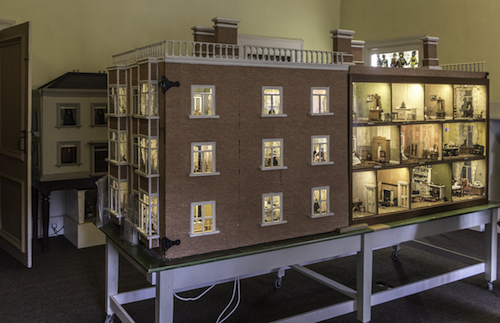 I couldn't resist peeping in the windows and wanted to share this photograph of one of the bedrooms. Check out that beautiful miniature needlepoint rug! 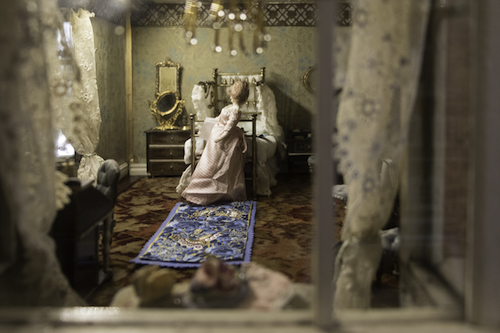 The Needlework Room and Pigeon Hole

The Needlework Room was a real feast for the eye! Displayed on the walls were 10 huge needlepoint panels, reaching almost to the ceiling. They were worked in the early 1700s by Lady Julia Calverley, shown in the painted portrait to the right of the panels. As they only took 3 years to make, it is unlikely that she made them all herself! The central panel is dated 1717.

They were brought to Wallington Northumberland in 1755 by Julia's son, after he sold Esholt Hall, the house for which they were originally made. 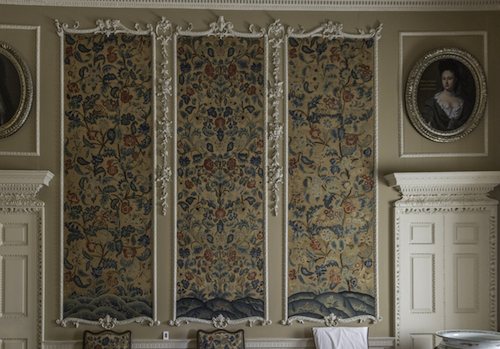 The following photograph shows a close up of one of the panels.

The work was done in tent stitch using wool and silk. The design is thought to be based on oriental textiles which were being imported into England at that time. 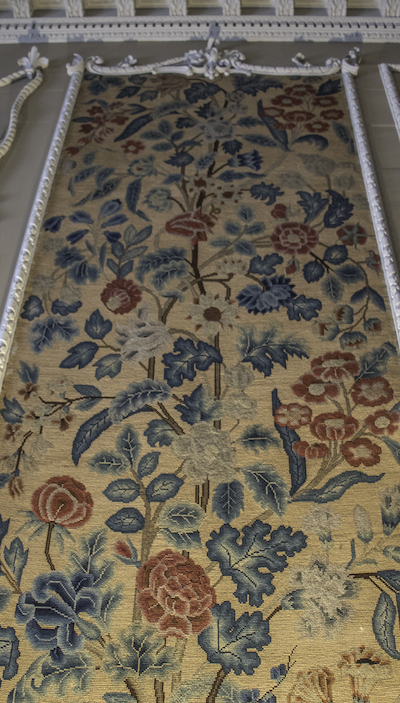 The Needlework Room also contained 6 chairs needlepointed in the same design although there is no proof of who made them.

Sorry about the strange angle of the following photo. There were ropes cordoning off much of the room so I was at an unusual angle when taking it! 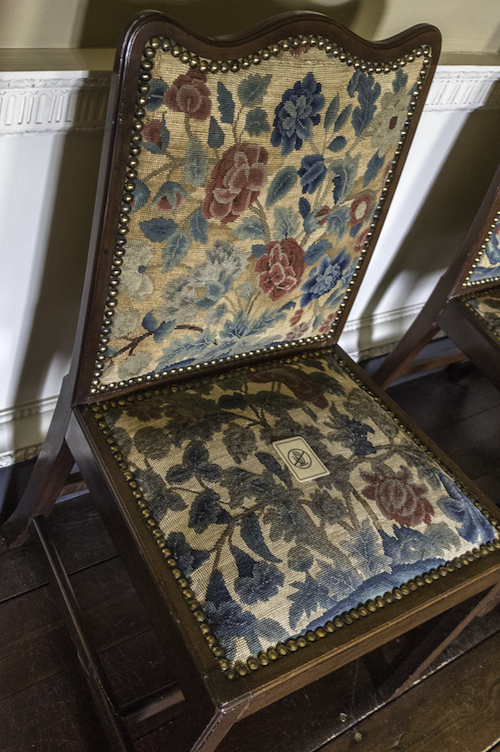 In addition, there was a more unusual seating arrangement in this room, known as a Conversation Seat, upon which 4 people could sit. The covers for this were also covered in needlepoint, albeit on different sizes of canvas. 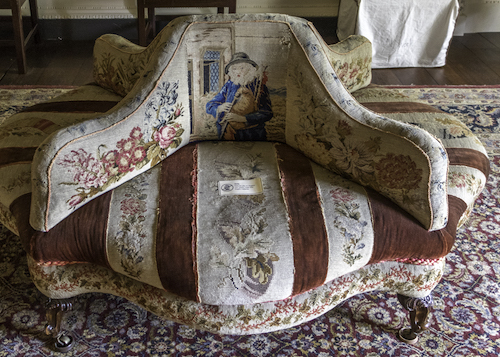 Although most panels were decorated with flowers, one depicted an old man playing the Border Pipes. (Thank you to Michael for correcting my previous assumption that they were Northumbrian Pipes.) This was worked in wool on a finer canvas. 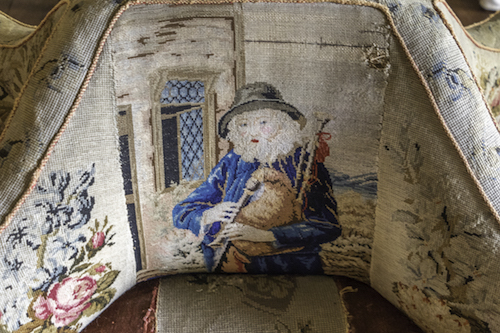 Lady Julia Calverley also created a fabulous six-paneled needlework screen in 1727, which is displayed in a tiny room next door, known as the Pigeon Hole.

These panels were worked in petit point using wool. The designs were based on engravings by Wenceslaus Hollar, which in turn were created for a book of poems that was published in 1663.

There was very little room and it wasn't possible to stand back far enough to photograph the whole screen, so I took the following close ups for you. I did take a few more, but as the area was very dimly lit I was unable to hold the camera steady enough to avoid blur in those shots. 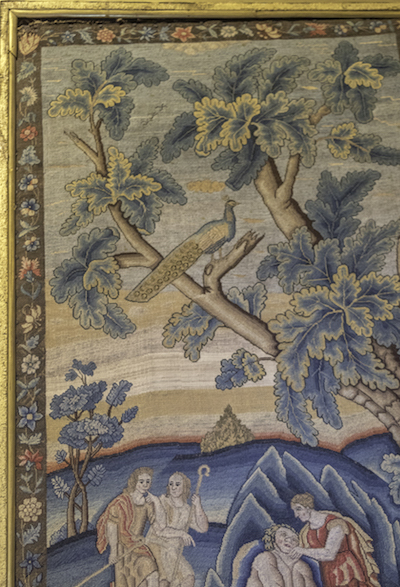 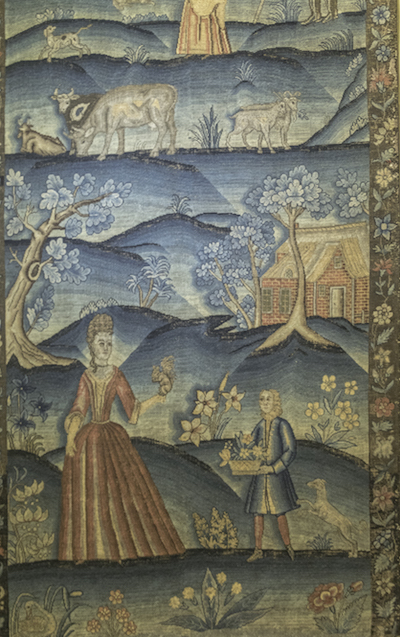 I love visiting the Nursery in old houses. This one was a real treat. Along with the dolls, bears and other toys there were a number of samplers on the wall.

This first one was dated 1825, and is signed by a 13 year old girl. Sadly I couldn't quite decipher her name. Most of the work appeared to have been done in cross stitch, with a border below the red building in a satin stitch.

From studying the photograph in close up, some of the alphabet at the top may have utilized eyelets, the D, G and J in particular. 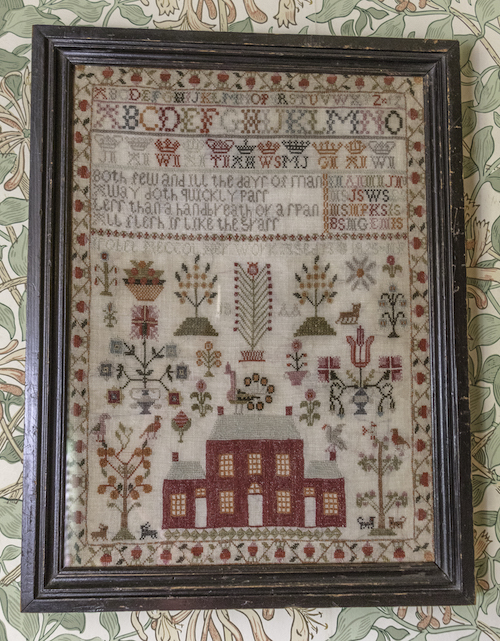 Jessie's sampler (below) was stitched on linen, in 1854, when she was 14. The motifs, border and alphabet again appeared to be worked in cross stitch. The verse likely used back stitch. I loved the little spotty dog just below the house, perhaps a family pet? 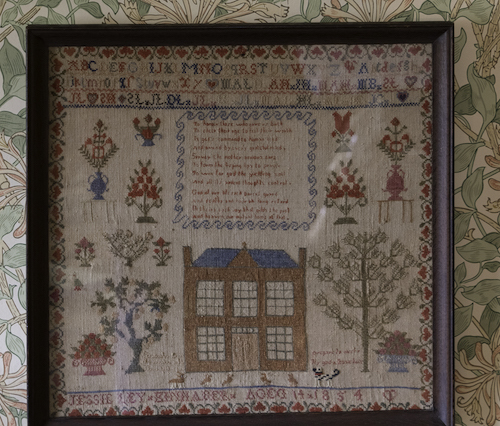 The third sampler was worked by a young lady named Margaret Parnaby, in 1809. She doesn't give her age, but the stitches did not appear as accomplished as those in the other two samplers.

I found this piece charming in it's naivety. The motifs appeared to have been drawn by the child and the scene depicts a farmyard complete with goats, horses, deer, ducks or geese, a cow being milked and a dog tied up to a kennel.

There are various figures hard at work throughout the scene, some using various farm equipment. I loved the figure bringing up water from the well and the people on top of the hay stack. A number of workers seemed to be wielding pitchforks.

I wouldn't have wanted to climb the ladder outside the farmhouse! It looked a bit rickety. 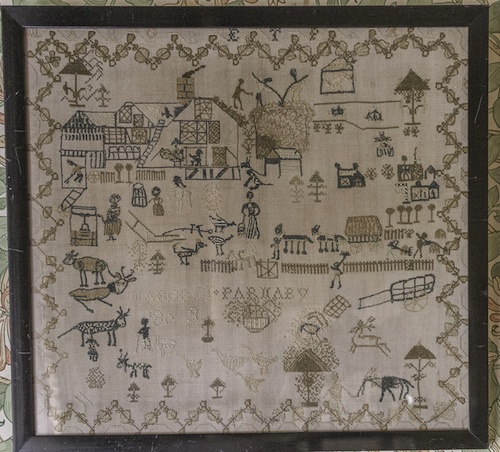 Our visit to Wallington Northumberland was very enjoyable but there were two rooms that we did not enter... 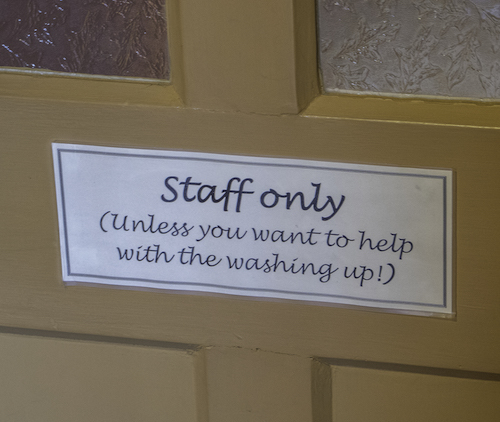