Continuing the section on embroidery history we move into the sixteenth century. Read part 1 here.

England's embroidery history has seen many changes, and during the sixteenth century religious subjects began to be less commonly used in embroidery.

Due to the Protestant Reformation, many pieces of ecclesiastical embroidery were lost or destroyed. Some, however, were smuggled out of churches and used in the home, for clothing or furnishings. These fortunate few have survived to this day, and they offer a detailed account of English embroidery from the 16th century.

We can also be grateful that Britain copied the European practice of producing pattern books for needlework, leaving us a legacy of the type of designs available at that time.

Dark wood-panelled rooms were furnished with cushions and hangings, providing comfort for those who could afford it. Professional embroiderers, rather than amateurs, were likely to have stitched these.

The adventurous Elizabethan Era brought new materials like silk, satin and linen upon which embroiderers created beautiful patterns with ornate gold or silver thread outlines around freely drawn natural forms such as flowers. fruits, animals, birds and insects. The most popular embroidered flowers at this time were pansies, roses, carnations and honeysuckle.

The embroidered items were loosely divided into two main groups:

The introduction of blackwork into the UK

Another form of embroidery gaining popularity in England at this time in embroidery history was blackwork.

The origin of English blackwork is unknown, although it may have roots in many civilizations.

The Islamic influence in the decorative arts included an allover geometric patterning with its scrolled, intertwining conventional foliage and strapwork design. A preference for this style can be traced back to Spain's early Byzantium culture which was enriched by Persia as well as ancient Greece.

The first wife of Henry VIII, Catherine of Aragon from Spain, has been credited with introducing it to the English nobility in the early part of the century. However, stitchers had most likely been doing similar needlework over one hundred years earlier.

Curiously, with no early examples left that we can study, we have turned to art, particularly paintings by Hans Holbein, which depicted people wearing garments trimmed with black thread patterns, to define the technique. However, embroidery history is somewhat confusing here.

Although one of the stitches used for today's blackwork is named Holbein stitch, he died in 1543, before the needlework style came about. The first time the two were connected was by the Royal School of Needlework in the 1950s.

Throughout embroidery history, many techniques decline in popularity at certain periods and this was the case with blackwork during the 17th century, although it is now popular again. 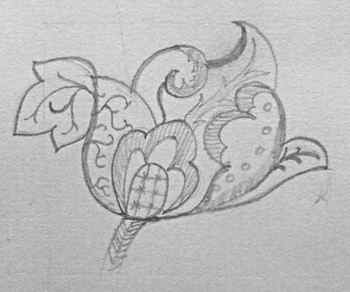 In this period of embroidery history, the style and methods changed once again.

Designs were generally much larger than in previous periods, with large panels and hangings being the common characteristic.

Grounds were usually linen with huge sprays of flowers or many-branched trees rising from mounds of earth among which animals run. The stag, a metaphor for the soul in some cultures, was often depicted fleeing from a leopard through the trees.

The stitching was done in wool, using light browns, light greens, orange and peacock blue which were favourite colours at the time, maybe due to the limited number of natural dyes available.

Sometimes work was embroidered in tones of one colour. 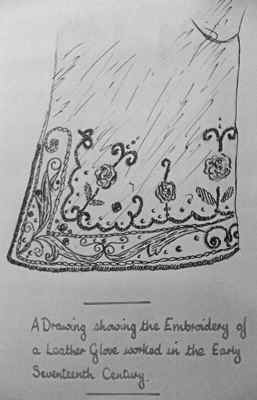 The charm and aesthetic beauty of Elizabethan patterns were lost in this era, to designs that are now considered exaggerated or grotesque.

The quality of workmanship was poor during this time period, which lead designers to show less originality with their creations.

A technique that was at its height of popularity from 1650 to 1690 was stumpwork. Whole landscapes were depicted complete with castles, palaces, fountains, gardens, clouds and radiating suns.

Populating this imaginative world were birds, animals and humans with no thought given to creating these characters to scale. Insects were often stitched as big as animals while humans were made much to large to ever fit inside the castles.

The motifs were not flat, but padded with wool or horsehair to become more like sculptures than previous methods of embroidery had been. Other items included in these creations were beads, glass, mica, wooden shapes, leather and sequins, along with gold thread.

When this raised embroidery was completed, often by girls as young as eleven, the pieces were sent to a professional who covered books or caskets with the heavy needlework before sending the items back to the stitcher. They were then looked after carefully, sometimes placed inside an outer box, which helped to keep them in good condition and dust free, as it would have been difficult to clean these objects.

The general type of work done during the 17th Century was still used in the 18th, but as time went on embroidery became much more naturalistic in character until eventually the imitation was such that the essential qualities of the needlework resembled brush work.

The great variety of natural objects...flowers, trees, birds, animals and insects... were often worked on the same piece of cloth. The growth of trade with China and the far East brought an influence in design and birds with wonderful plumage and flowers resembling the lotus and chrysanthemum were introduced alongside the traditional English forms.

Household items such as hangings and coverlets were embroidered in much the same way as in the previous century of embroidery history, however, there was a change from worsteds to silks and in addition, there was a great interest in embroidery in relation to furniture.

Chair and stool covers were worked in cross stitch, and needlepoint stitches known as petit point and gros point.

Both men's and women's costumes were decorated with sprigs and borders, finely embroidered flowers and leaves, often with the addition of metal threads. These were usually worked in satin stitch or long and short stitch.

While embroidery was still largely practiced, this period on the whole was one of revival rather than originality. As an art much of the work deteriorated. This may have been due to the introduction of machinery and mass reproduction. The field of women's interests became much wider and with increased activities outside the home there was less time for domestic crafts.

Costume was much less elaborate and embroidery was usually replaced by machine made braids and motifs.

The vogue for the sampler was very apparent in the first half of the century and there followed a fashion for woolwork pictures.

Although samplers of stitches and methods had been made for many years it was in the 18th and 19th Century that they became one of the chief occupations of the embroiderer. They often had some pictorial value, of a very formal type, which had in addition in the 19th century, a quotation which might be a motto, words from the Bible or often a rhyme of gloomy sentiment.

These samplers were often done in wool cross stitch on canvas and the general design included the name and age of the worker, the date, the alphabet, a quotation, formal motifs and a border.